Be a House of Prayer – Weatherproof 34 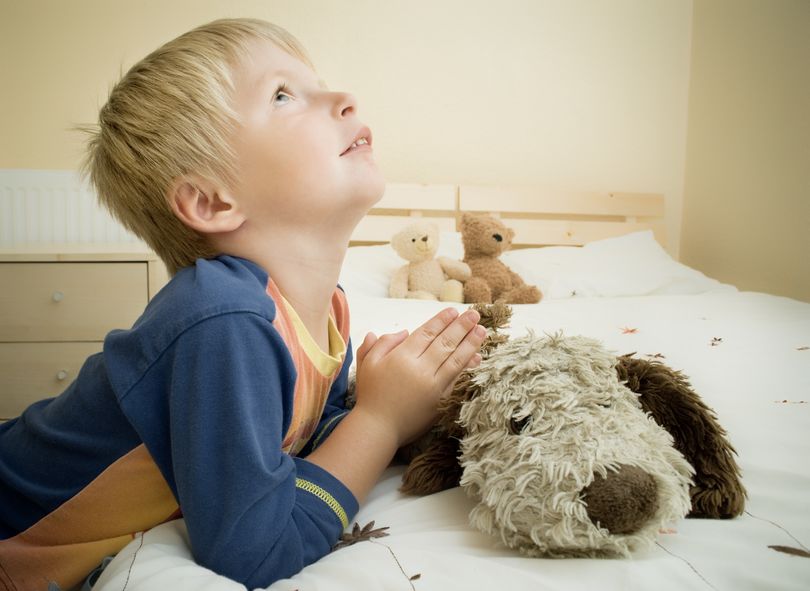 My first encounter with prayer was at night, bedtime, to be exact, kneeling by the side of my bed with folded hands, being coached, phrase-by-phrase, by my mother, who either sat on the bed or stood near me. “Now I lay me.” Now I lay me. “Down to sleep.” Down to sleep. I pray the Lord. My soul to keep. If I should die. Before I wake. I pray the Lord. My soul to take. God bless Mommy, Daddy, Pat, Penny, and Karen. Amen.” Soon I would have two little sisters and a couple brother-in-law’s to add to the list, but this is how it began.

Eventually, my prayer life expanded, while listening to my mother sing, or hum, hymns, and songs throughout the day. One song I picked up on was from a story I had also seen illustrated in a Bible Storybook located in the waiting room of Doctor Dan Ticinovich’s office. The story of Daniel in the Lion’s Den caught my imagination, and, even as a little boy who could not yet read, the drawings of Daniel being thrown in a dark, inescapable pit, surrounded by man-eating lions, was terrifying, and I would try and imagine myself in his place, among the lions. Prayer was the central theme of the song, and how, through prayer, Daniel was neither harmed nor afraid, as God took some kind of unseen control over the lions, making them leave Daniel alone. My mom would sing:

“Daniel was a man of prayer, daily praying three times.
Till one day they cast him down, In the den of lions.
Even then in the den, Fear could not alarm him,
God had shut the lions’ mouths, So they could not harm him.”

No fear. I thought that was amazing. I was scared just imagining myself in the pit with Daniel and the lions. So, before I could even read, and a decade before I would personally discover God’s saving love in Jesus, I knew that God was in charge, and prayer, somehow, invited His involvement in my life.

The context of this passage in Matthew 21 is the Triumphal Entry of Jesus into Jerusalem, riding on a donkey, fulfilling Old Testament prophecy, to the very day, that had predicted the arrival of the Messiah. The first thing Jesus did upon arriving was to go to the Jewish Temple and wreak some havoc by turning over tables and kicking out the vendors who were there, ostensibly, for the convenience of worshippers, but who were, in practice, exploiting people for gain.

Jesus quotes two prophecies as he drives the vendors from the premises.

“I will bring them to my holy mountain of Jerusalem and will fill them with joy in my house of prayer. I will accept their burnt offerings and sacrifices because my Temple will be called a house of prayer for all nations.” Isaiah 56:7 NLT

This verse is written in the middle of a beautiful blessing for all nations, as God describes what His eternal kingdom is like, and how blessing and peace, confidence and safety, will be forever and always.

“Don’t you yourselves admit that this Temple, which bears my name, has become a den of thieves? Surely I see all the evil going on there. I, the Lord, have spoken!” Jeremiah 7:11 NLT

In this passage from Jeremiah, the Lord is challenging the people to recognize the holiness of God’s Temple, and the fact that they cannot hide behind it while walking in disobedience. You can’t have it both ways.

The Temple of God, that is, the place set apart for His worship and presence, was a physical structure envisioned by David and completed by Solomon in the Old Testament. Solomon’s temple was destroyed by Nebuchadnezzar II, but subsequently rebuilt about 70 years later. The 2nd temple, as foretold by Jesus, was, itself, demolished by the Romans around A.D. 70.  But, as Steven declared, “God does not dwell in temples made with hands” (Acts 7:48), quoting the prophet Isaiah, through whom the Lord said:

Thus says the Lord. “The heaven is My throne, and earth is My footstool: where is the house that you will build Me? And where is the place of My rest? For all those things My hand has made, and all those things exist,” saith the Lord. “But on this one will I look, On him who is poor and of a contrite spirit, and who trembles at My word.” Isaiah 66:1-2 NKJV.

Rather than a building, God is more likely found in and among people—humble, simple, God-fearing, prayerful, people. Jesus said as much when He revealed that His kingdom would be stealth, unobservable with the human eye, that is, without a physical structure or monument—“for indeed, the kingdom of God is within you.” Luke 17:21 NKJV

This, then, is God’s Temple, the center of worship and presence—the heart and spirit of the humble. The One dwelling in the many, making the many one in Him, the Church.

Now, therefore, you are no longer strangers and foreigners, but fellow citizens with the saints and members of the household of God, having been built on the foundation of the apostles and prophets, Jesus Christ Himself being the chief cornerstone, in whom the whole building, being fitted together, grows into a holy temple in the Lord, in whom you also are being built together for a dwelling place of God in the Spirit. Ephesians 2:19-22 NKJV

Don’t you realize that all of you together are the temple of God and that the Spirit of God lives in you? God will destroy anyone who destroys this temple. For God’s temple is holy, and you are that temple. 1 Corinthians 3:16-17 NLT

So, by extension, when Jesus entered Jerusalem and cleansed the physical temple of sinful behaviors and practices, declaring that it should be restored to its purpose, to be a house of prayer for all nations—He was also talking about our lives, both individually and corporately as the Church of Christ. We must be cleansed and set apart as vessels of God’s peace in the world—through prayer. There is no place for sin, greed, petty disputes, or selfish gain, you (we) are the Temple of the Lord and must be set apart by prayer and holiness, to stand in the gap for a lost and dying world.

Like the little boy kneeling by his bedside, entreating the blessing of God, or like Daniel, who’s prayer discipline prepared him in every way to withstand the direst of circumstances, we must restore our dependence on God through prayer.