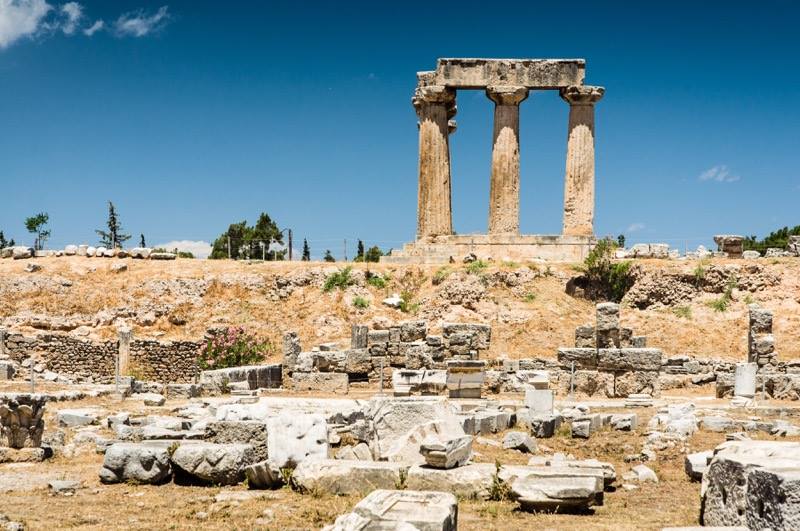 And now abide faith, hope, love, these three; but the greatest of these is love. 1 Corinthians 13:13

Paul may have intended on a brief stay in Corinth, stopping at the Grecian port city on his way home from Athens, but God had other plans. It was in Corinth that he met Aquila and Priscilla, transplants from Rome who also happened to be Tentmakers, so he stayed with them and worked while preaching to Jews and Greeks in the Synagogue. God gave Paul a vision to speak boldly in Corinth and he did, with many people being baptized into Christ including the ruler of the local synagogue. Paul wound up staying there for a year and a half establishing a local church. This was in 51 AD.

A few years later word had gotten back to the Apostle that there were some problems in the young church so Paul wrote them a lengthy letter of correction. He spoke to each issue with Apostolic authority while reminding them of spiritual realities and a more excellent way to live.

Reading about the problems in the Corinthian church is kind of like seeing a car pulled over for speeding. As we drive past we realize almost all of us were doing the same thing, but this guy got caught.

This letter could have been written in any of the last twenty centuries to just about any group of people who organized under the banner of a church. How can I be so sure? Because there are people involved.

And people are predictable.

People tend to follow the big names. "I follow Paul." "I follow Apollos." We do the same thing. If a certain speaker says it, it's Gospel, profound, revelatory. We'd follow them off a cliff – which is where following a man (or woman) often leads. True leaders, like Paul and Apollos, are fellow-servants of Christ. They're not trying to gain followers for themselves, they're gathering others to stand with them before the King of Kings.

People practice and/or condone immorality. The word used for fornication in 5:1 is 'porneia,' sound familiar? And Paul says such a one should be put out of the church till the lusts of the flesh are burned up. As he wrote to the Romans, "They know God's justice requires that those who do these things deserve to die, yet they do them anyway. Worse yet, they encourage others to do them, too." (Romans 1:32).

Regarding immorality, contemporary culture may be the worst of all time. But Christian, Pauls word is simple when it comes to sexual immorality – Run!

"Run from sexual sin! No other sin so clearly affects the body as this one does. For sexual immorality is a sin against your own body. Don’t you realize that your body is the temple of the Holy Spirit, who lives in you and was given to you by God? You do not belong to yourself, for God bought you with a high price. So you must honor God with your body." 1 Corinthians 6:18-20

And then, the many gifted brothers and sisters in the Corinthian church seemed to be bickering selfishly about sharing their spiritual gifts in the assembly.

I think of the Body Building competitions which were sometimes featured on television when I was a kid. In these contests six or eight huge, musclebound men, would smile and pose for applause and notice, jockeying for position, nudging one another aside, preening for the judges. It was quite a spectacle. I'm not making a direct comparison, the simple point is that a worship service is not a talent competition, not a body-building contest.

The church is not a contest to see who is smarter, or more inclusive or more doctrinally sound or who has a better design aesthetic. This is the church:

God is faithful, by whom you were called into the fellowship of His Son, Jesus Christ our Lord. 1 Corinthians 1:9

Dear one, let us not be burdened by worldly vices that want to follow us into communion with Christ. Leave those bags at the door of repentance. Enter to love the Lord Jesus, to be changed by Him, and to love your neighbor with unconditional love.

Be on guard. Stand firm in the faith. Be courageous. Be strong. And do everything with love. 1 Corinthians 16:13-14